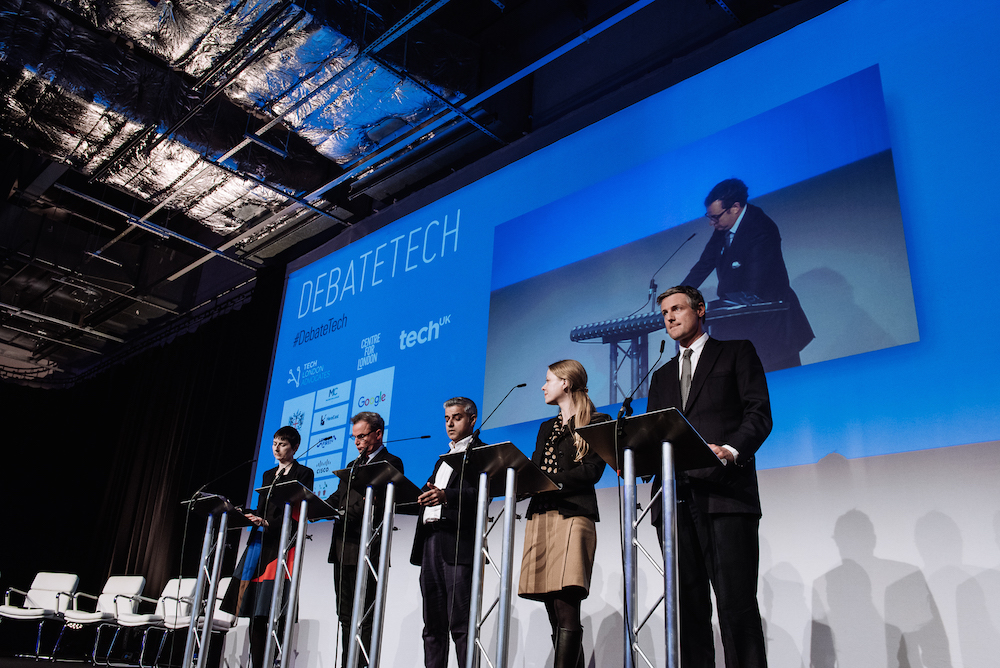 Yesterday afternoon, over 600 of London’s finest tech minds congregated at Here East in Stratford to grill mayoral candidates on their plans for London’s digital future.

DebateTech, which followed the launch of the ground-breaking Mayoral Tech Manifesto two weeks ago, was organised by Tech London Advocates, Centre for London and TechUK, in collaboration with Seven Hills.

Russ Shaw, founder of Tech London Advocates, last night celebrated the fact that for the first time, technology has been recognised by the democratic process as crucial to the prosperity of London.

The candidates endorsed the Tech Manifesto whole-heartedly, aware that London’s technological future is sure to be fresh in the minds of voters as they head to the polling stations.

Chaired by Seven Hills co-founder Michael Hayman MBE, discussion centred on the role of wireless internet as the fourth utility and the unacceptable prevalence of ‘not-spots’ in areas of London. Questions were fielded about restrictions on access to talent and concerns were shown over the alarming lack of digital literacy, especially among the UK’s elderly population.

All the candidates pledged to halt the conversion of commercial property into residences and to use technology to improve infrastructure throughout the capital, but there were clear differences of opinion on how these changes should be implemented.

The audience, comprised of innovators and advocates from across London’s tech sector, were also treated to a post-match analysis of the debate from expert technology and media panels held after the main event.

As the #DebateTech hashtag soared to the top of the UK Twittersphere, it became clear that technology is beginning to take its rightful place at the top of the political agenda.

Regardless of who emerges victorious in May, the real win belongs to the city, as it seems that the UK technology scene is finally getting the recognition and support it deserves.

You can now watch the highlights film here: