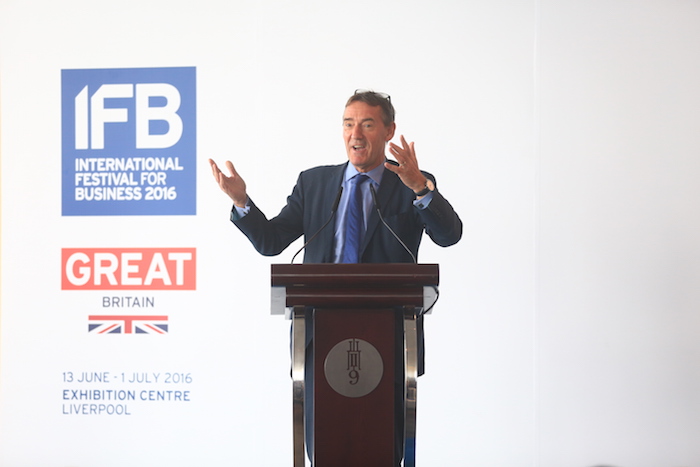 Today, Seven Hills supported the International Festival for Business 2016 launch in Shanghai, as part of the UK government’s official visit to China.

Lord O’Neill, Commercial Secretary to the Treasury and Mayor of Liverpool, Joe Anderson OBE, unveiled IFB 2016 to an audience of over 100 Chinese businesses and officials.

IFB 2016 will be opening in June 2016 and is the largest business expo of its type in the world. It will see some of the world’s most influential business leaders, entrepreneurs, free-thinkers and investors coming together in Liverpool.

As a snapshot of what to expect next summer, six innovative companies from across the Northern Powerhouse joined the delegation and presented their businesses.

Lord O’Neill cast a spotlight on the industries that are defining the output of the Northern Powerhouse, outlining the significant investment opportunities in the UK, with a specific focus upon manufacturing, creative, digital, energy and environmental sectors.

Following this Joe Anderson OBE emphasised the long-standing links between IFB’s host city, Liverpool, and Shanghai and the importance of continuing to strengthen trade relations between the two countries.

Max Steinberg CBE, chair of IFB 2016, commented: “Today’s event represents a snapshot of the trade and investment opportunities that exist across the Northern Powerhouse cities and we look forward to welcoming Shanghai – and the rest of China – to IFB in June next year.”

IFB 2016 is a key part of the government’s ambitions to rebalance the economy and double UK exports by 2020. It follows the inaugural festival in 2014, from which more than £300m of trade and investment deals and 10,000 jobs are expected by 2017.