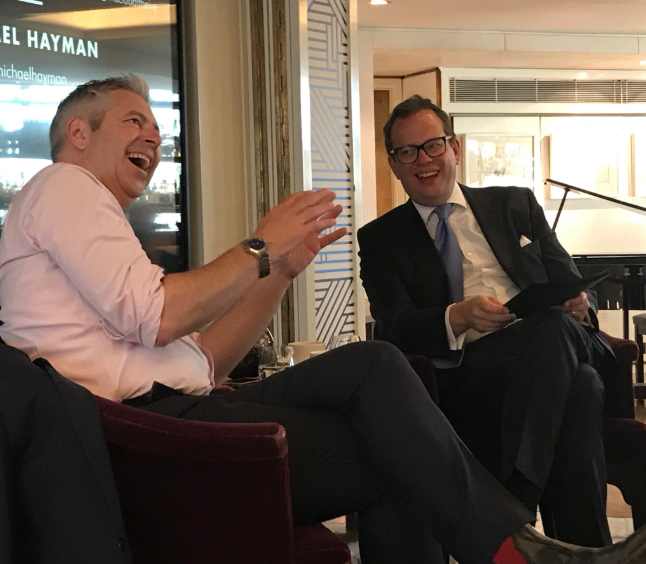 “Liberal America was on a roll, and they just pushed too hard,” explained Justin Webb when asked by Michael Hayman how Trump’s America came to be.

The Today programme presenter and former BBC North American Editor was the latest guest in the Club at the Ivy breakfast series.

He argued that President Trump’s rejection of liberal values comes from a hatred of a particular level of political class: “Trump supporters don’t dislike super-rich people who don’t impose on your everyday life. Who gets in your way? Who imposes on your life? It’s the professional upper-middle class.”

He went on to describe Hilary Clinton as the embodiment of the class and spoke about the total divide that cuts across US politics, “Now you know that if someone goes hunting and to church, they are a Republican. If they support abortion, they are a Democrat – that didn’t used to be the case. Increasingly in the US, you can point to a house and say which way they vote.”

Justin said a second term could be on the cards for the 45th President and said Democrats need to question what type of politics they would like to engage in and labelled Barack Obama as a foreign policy failure, “Obama was incredibly predictable. Whereas Kim Jong Un will have looked at Trump and gone ‘this guy is even crazier than I am!’”

Staying on the topic of personality, Justin made it clear that Trump is by no means the first morally ambiguous person to sit in the Oval Office, citing Presidents Kennedy and Nixon in particular. “Donald Trump as a person is deeply, deeply strange – but that doesn’t make him a bad president.”

Justin’s response: “The narcissist in Trump could well lead him to destroy the entire world, and unlike in TV there wouldn’t be much anyone could do to stop it” “But if he doesn’t – take a look at how the economy is progressing and we may well look back on the Donald Trump presidency as no more than a blip.”