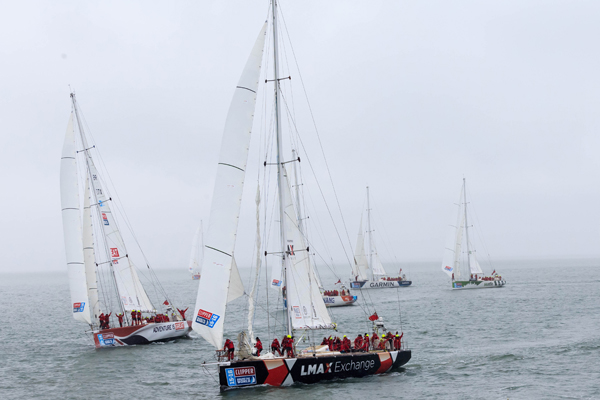 On 31 August, the biennial Clipper Round the World Yacht Race set off from St Katharine Docks. Among the 12 boats on the start line was a crew sponsored by LMAX Exchange, the UK’s leading fintech firm and a client of Seven Hills. The craft led the way out of London, beginning an eleven-month race around the world.

The race, recognised as one of world’s hardest endurance challenges, is the longest of its kind and amateur crews will be visiting fourteen markets across six continents, under the leadership of a professional skipper before finishing back at St Katherine’s in July 2016.

The event creates an unparalleled opportunity for LMAX Exchange to make a global impact, and the firm’s CEO, David Mercer, is aiming to join the team for part of the race. It will not be David’s first adventure: in early 2015 he trekked through the Arctic to participate in a Guinness World Record-breaking rugby game at the North Pole.

Ranked the fastest growing technology firm in the UK in the 2014 Sunday Times, Tech Track 100, LMAX Exchange counts numerous global banks, hedge funds and brokers among its clients, who operate in 90 countries worldwide. The Clipper 2015-16 Race is an unparalleled opportunity to generate excitement for the LMAX Exchange brand around the world and to reinforce its leading position in global capital markets.

The firm will host a number of events in the major financial centres covered en-route, including London, Sydney and New York. Clients will be invited to the race villages, and the race will provide a unique atmosphere for showcasing LMAX Exchange’s successes.