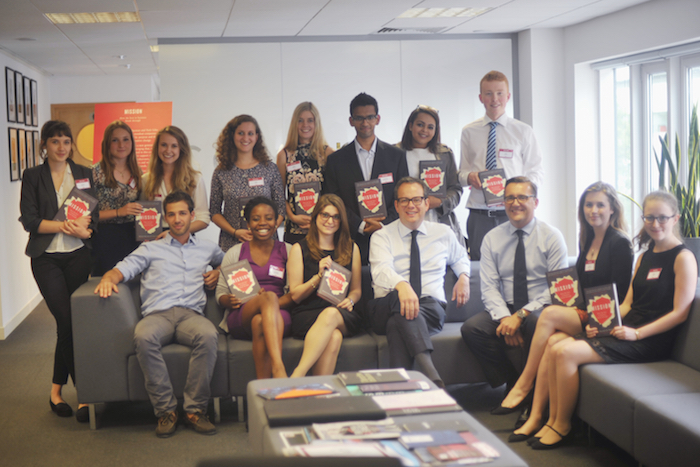 Last week fourteen university students and recent graduates spent the day at the Seven Hills offices for the company’s inaugural Campaign Crash Course. The group, which included students from University of Oxford, University of Cambridge and Durham University, were given an insight into campaigning.

Co-founders Michael Hayman and Nick Giles spent the morning with the group, giving them an introduction to Seven Hills, presenting their new book ‘Mission’ and discussing the idea of business as a force for good.

The young team were then split into smaller groups for the afternoon’s challenge: creating their own campaign. Each group was given two hours to come up with a campaign and a three-minute supporting pitch, with senior representatives of the Seven Hills team on hand to support.

The group presented their work to Michael, Nick, Josh Davis, head of editorial and Christina Elsom, head of recruitment. The series of pitches were for campaigns to promote charity CU Safe; to educate the public about Africa; to raise the profile of Australian company Flow Hive; to boost cancer awareness amongst young people. Hannah Sewell, Dimitris Dimitriadis and Abigail Harris were announced the winning team for their cancer awareness campaign. After a short break, all four teams then repeated their pitches to the wider Seven Hills team.

Reflecting on the Crash Course at the end of the day, intern Fabrizia Scivoli said, “It was a challenging day but lots of fun and gave me a great opportunity to practice my presentation skills”.