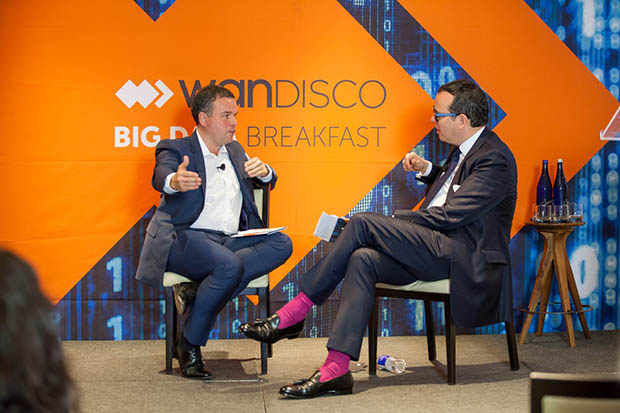 High-growth tech firm WANdisco mapped out the Big Data opportunity for the UK’s public sector this week as it brought its Big Data Breakfast back to the capital.

Taking place at London’s iconic City Hall, the event brought together some of the most influential figures from across the public, private and third sectors to take the pulse of Big Data in Britain, exploring how emerging technologies can increase efficiency while saving money and lives.

The Big Data Breakfast: Britain’s Data Heartbeat marked the launch of WANdisco’s latest in the firm’s Think Big series of thought-leadership reports, which focused on the wide use of data innovation within UK government.

WANdisco CEO and co-founder, David Richards, kicked off the morning with a view of the latest private sector innovations, predicting that 2015 will be the year that Hadoop makes its mark on the enterprise.

Speaking in conversation with Seven Hills co-founder and event emcee Michael Hayman, David spoke of the different ways that Big Data has already been applied by Government agencies across the globe, describing the last 12 months as representing a “seismic shift” for the technology.

The morning’s keynote was provided by Tim Kelsey, Director for Patients and Information for NHS England, who spoke of his firm belief in data’s potential to revolutionise the UK’s health service.

“A big priority for me has been to give people access to their own medical records, and that starts digitally from this March,” Kelsey said, who also announced that the Government’s controversial Care.data initiative was to be relaunched.

“So 2015, will be the first year that citizens in this country – and of any country in the world – will have comprehensive access to their GP records. It’s an opportunity, both for Big Data analytics, but much more fundamentally for people to get to grips with their own health, and care.”

Kelsey warned that collecting and storing patients’ medical records was the only way to fill huge gaps in NHS knowledge: “There are gaps so big, so dangerous, that they just have to be filled from a moral as well as a political perspective. We’re going to be doing that this year.”

Eddie Copeland, head of the technology policy unit at leading think tank Policy Exchange, spoke of the need to establish an ‘Office of Data Responsibility’ to safeguard the way in which data is used and minimise the negative perception surrounding governments collating and mining personal data.

“The biggest innovation in the private sector is the fact they’ve managed to apply big data analytics to our personal data,” Copeland said, before suggesting that consumers are comfortable with the likes of Tesco, Amazon, Facebook and Google being able to use personal data.

“But when the public sector does it, however, they say it’s outrageous. The media complains, there’s a huge public backlash,” he added.

The Breakfast also heard from the likes of Michael Ibbitson, CIO of London Gatwick Airport, who provided a snapshot of how Big Data is fuelling innovation at the airport and enabled it to service a record 38 million passengers in 2014.

A panel discussion featuring representatives from UNICEF UK, the Office for National Statistics and techUK explored the opportunities and challenges surrounding the use of public data, while a debate including Capita, SAP and the Big Data Partnership highlighted the lessons the public sector could learn from private companies.

The Big Data Breakfast: Britain’s Data Heartbeat marked the third in a series of events after recent gatherings in New York and as part of the inaugural London Technology Week.